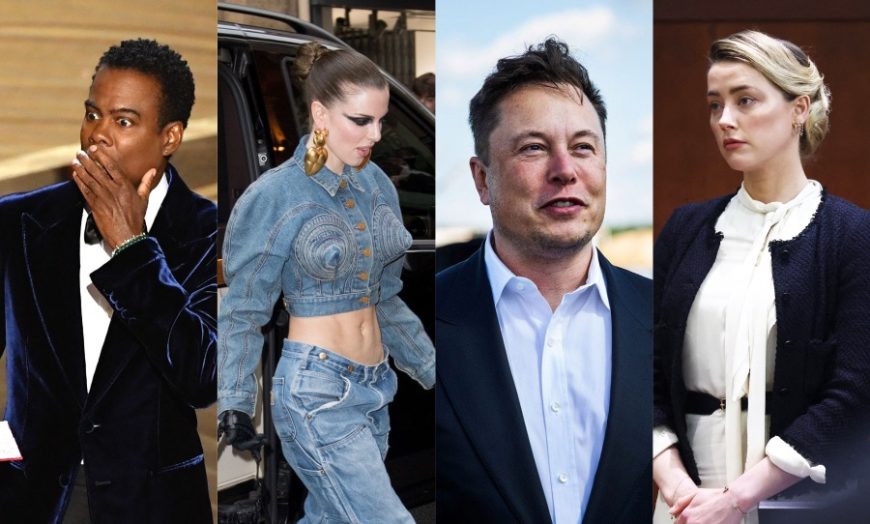 We’re sifting through all the noise of this year with our definitive list of the ten biggest pop culture moments of 2022.

It’s been a hectic year. Between warring countries, royal deaths and lettuce prices soaring to levels usually reserved for smashed avo toast, it can often be tricky to sift through just how much went down in 2022.

It was the year that our collective attention drew away from the pandemic, with talk of vaccination shifting to undoubtedly more matters: bizarre pop culture stories.

Whether it was the six-week fling between a controversial rapper and an Uncut Gems muse, or a prime minister being overserved at a Sydney concert, 2022 offered more than its share of water cooler talk. In what reads like a B-movie screenplay, the list of pop culture phenomena this year includes an onstage assault, celebrity trials and billionaires acting a fool. So, as the year draws to a close, we’re sifting through all the noise with our definitive list of 2022’s biggest pop culture moments.

Actress and model Julia Fox was already on her way to becoming tabloid fodder in early 2022, when a video of her pronouncing the film Uncut Gems — which she starred in with Adam Sandler in 2019 — went about as viral the Omicron variant. It was around that time when Fox met Kanye West, engraving into the public imagination a relationship so chaotic it’ll be studied in history books. Matching double denim outfits and some bizarre eye makeup naturally ensued, before the six-week fling ended, fittingly enough, on Valentine’s Day.

The slap heard ‘round the world

A decade from now, everyone will remember where they were when Will Smith slapped Chris Rock at the 2022 Academy Awards in March. The move — sparked by Rock’s joke directed at Jada Pinkett Smith — made Oscars history, and resulted in some of the best celebrity reaction shots that Hollywood has ever seen. In one of those serendipitous pop culture moments that makes you believe in the laws of the universe, Smith would go on to win the award for Best Actor, with his slap later launching thousands of think-pieces.

The avalanche of negative buzz surrounding Olivia Wilde’s sophomore film, Don’t Worry Darling was enough to warrant its own behind-the-scenes documentary. From rumours of an extramarital on-set love triangle, to the termination of the film’s lead actor, the toxic press surrounding the film culminated in a supposed exchange wherein Chris Pine spat on co-star, Harry Styles. So insurmountable was the fanfare around Don’t Worry Darling that when it eventually premiered in September, it was met with tepid reviews.

The word on everyone’s lips this year was “inflation,” and no product was harder hit by the COVID byproduct than lettuce. At one point, in June, the cost of the vegetable (which is essentially crunchy water), shot up to $12 — some four times its original price in early 2022. But it wasn’t the only item that inflation skyrocketed into pop culture infamy. With broccoli and cucumber prices more than doubling, 2022 made it near-impossible to follow mum’s orders of eating your vegetables.

Trial by TikTok: Depp vs Heard

Scroll through social media for more than two seconds this year and you would’ve been sucked into the viral vortex that was Depp vs. Heard. The defamation trial between the two stars offered a perverse peek into the lives of Hollywood’s glitterati, with jaw-dropping revelations of defecation, a rumoured tryst between Depp and his lawyer, and TikTok’s algorithm permanently fixed in the courtroom. Depp ultimately won the case, and was awarded $10 million in compensatory damages and $5 million in punitive damages.

Albo skulls a beer at Gang of Youths concert

First order of business upon Anthony Albanese’s election in May? Skull a beer in front of legions of cheering audience members, of course. The newly-elected prime minister attended a Gang of Youths concert at Sydney’s Enmore Theatre in August, mitigating the stress of his new office by downing a beer mid-way through the band’s set. It’s the sort of Australian larrikinism usually reserved for Bob Hawke, and it all but affirmed the country’s choice to oust a certain former PM.

Albo getting cheers (and peer pressure to skull his beer) at Gang of Youths pic.twitter.com/5h5ETHglsA

Elon Musk’s acquisition of Twitter was fraught with legal battles, cheap social media feuds and questions as to how this manchild found himself such a predicament. The world’s richest man faced off against its most popular social media platform, with Musk constantly changing the terms of the deal until his offer of $44 billion was accepted in August. You only need to scroll through Musk’s recent Tweets, and the list of celebrities he’s banned, to know that this story is very much still unfolding.

Am giving serious thought to this

No figure quite captured the public imagination as prolifically as Queen Elizabeth. Her tragic passing in September bookend what was the longest reign of a female monarch in history, and prompted an outpouring of well-wishes from those whose lives she touched. Naturally, attention turned to her son and King-in-waiting Charles, who has received quite the chilly reception ahead of his coronation in May of next year.

There’s no doubt that the child of Rihanna and ASAP Rocky has officially hit the genetic lottery (imagine the wardrobe), which is why news of the pop star’s pregnancy sparked such fanfare in January — not least because her relationship with the rapper was somewhat fresh at the time. Of course, a tonne of baby bump pictures promptly broke the internet in the following nine months, culminating in the child’s birth in May. The couple have remained tight-lipped about the baby’s name, but expect that to make its way onto next year’s list.

This man just can’t seem to keep it in his pants. Davidson’s engagement to singer Ariana Grande was the talk of 2018’s pop culture infamy, and his ability to punch well above his weight made headlines again this year, this time with none other than Kim Kardashian. Davidson promptly made his cameo in the reality TV star’s namesake show, and was the subject of much public hostility from Kanye West. For all the tabloid fodder it inspired, Kim and Pete eventually called it quits in August.